Barron Trump At Tiffany’s Wedding: See The Teen At His Sister’s Nuptials 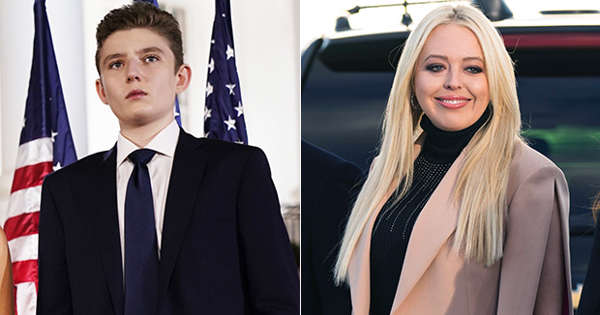 Barron, the 16-year-old lookalike of his father Donald Trump, supported his half-sister Tiffany during her extravagant nuptials at Mar-A-Lago.

He’s all grown up! Barron Trump looked just like his father Donald Trump at half-sister Tiffany Trump’s wedding to Michael Boulos on Saturday, Nov. 12! The 16-year-old student, whom Donald shares with wife Melania Trump, looked quite dapper during the extravagant event held at his father’s Mar-A-Lago estate in Palm Beach, FL, as seen in photos here.

Tiffany’s wedding appeared to go off without a hitch, even though there were reportedly concerns about a possible Category 1 hurricane hitting the southern Florida property. In fact, the Mar-A-Lago staff were evacuated on Wednesday, Nov. 9 over safety issues, according to a source for Page Six. “It was going to be a whole over-the-top thing,” the insider said at the time. “They had to cancel events today and canceled a golf outing for tomorrow.” While the source went on to say Tiffany was “flipping out” about the weather situation at the time, the club reopened on Friday and the wedding preparations picked right back up.

On January 19, 2021, Tiffany announced her engagement to Michael, revealing that the heir to his family’s multibillion-dollar business Boulos Enterprises had popped the question after 3 years of dating. Alongside a snap of the couple at the White House posted to her Instagram, Tiffany said it was an “honor to celebrate many milestones” at 1600 Pennsylvania Ave. while her father was President, and that her engagement was the icing on the cake. “Feeling blessed and excited for the next chapter!” she added.

After meeting in Greece in 2018, Tiffany and Michael began dating and were inseparable from then on out. Michael serves as the associate director of SCOA Nigeria, the director of the Fadoul Group and the business development manager for Royalton Investment. Tiffany graduated from Georgetown Law School in May 2020, and is currently a legal research assistant.

Meanwhile, Barron’s dad Donald has been married three times, first to model Ivana Zelníčková, and the former pair share two sons and a daughter together: Donald Jr, Eric and Ivanka. He next married actress Marla Maples, who is the mother of Tiffany. After Donald’s second divorce, he tied the knot with Melania and she gave birth to their only son Barron in March 2006.

Barron Trump’s Taller Than His Parents

Barron Trump is the youngest son of Donald Trump, whom he shares with his wife, Melania Trump. His older siblings are Ivanka Trump, Donald Trump Jr., Eric Trump, and Tiffany Trump. Barron was still in elementary school when his father was elected president in November 2016, and then inaugurated in January 2017. His parents made the choice to do things unconventionally because of this.

Barron and his mother stayed behind in New York City and continued living at the Trump Tower in order to let him finish his semester and not interrupt his schooling. They then moved to the White House.

Barron is rarely pictured out in public, though he attends White House events. Here, Donald Trump, Barron Trump, and Melania Trump, return from their summer vacation at their New Jersey home and golf resort in Bedminster, New Jersey in August 2019. The photo was taken on the White House lawn, while Donald was still president. At just 13 years old, Barron was already towering over his father.

To see pics of the former First Son, scroll through this gallery.

Former President Donald Trump, Melania Trump, and son Barron Trump watch the funeral of Ivana Trump. Her casket was being into a hearse at St. Vincent Ferrer Church on Jul. 20, 2022. He wore a dark bluesuit and looked somber.

Many generations of Trumps say goodbye to Ivana Trump. The stoicly watched her be laid to rest.

Barron Trump right, stands with former President Donald Trump and former first lady Melania Trump on the South Lawn of the White House in August 2020. The family were decked out for the occasion.

Barron Trump Towers Over His Parents

Barron Trump, walks with parents Donald Trump and Melania Trump to Air Force One. The family spent the weekend at their golf resort in Bedminster, New Jersey.

Barron Trump Returns To The White House After The Super Bowl

Home sweet home! Barron Trump returns to The White House in Washington, D.C. in a navy coat similar to Donald’s after the son, father and Melania spent the weekend at the POTUS’ Mar-a-Lago estate. The Super Bowl happened that weekend as well, and so Donald hosted a viewing party for the NFL’s biggest game of the year.

Barron Trump Is Nearly A Head Taller Than His Parents

Barron Trump soars above his parents Donald (6’2″) and Melania (5’11”) as they walk on The White House’s South Lawn on Jan. 17, 2020! The family is jetting off to their favorite resort in Florida, Mar-a-Lago.

Barron Trump looks so tall here! The teen, who’s 13 years old here, towers past his parents’ heads as the Trumps walk towards Marine One to whisk them away from Washington, D.C. to Florida on Jan. 17, 2020.

After the Trumps threw their swanky New Year’s Eve party in Florida’s Mar-a-Lago resort in 2020, Barron, Donald and Melania are seen arriving at The White House on Jan. 5, 2020. Barron, who’s wearing a green bomber jacket, walks alongside his parents on the lawn.

Barron and Donald Trump have a matching dad-son moment in black jackets while walking outside The White House on Feb. 18, 2019. Melania, meanwhile, faces the cold in a grey coat.

Barron Trump contrasts Donald’s black suit with a red puffer jacket. The pair is seen walking on the South Lawn of The White House following a trip to Mar-a-Lago in Palm Beach, Florida on March 10, 2019.

Donald, Melania, and Barron Trump at Andrews Air Force Base

Barron Trump and his parents leave the White house

Barron Trump, 13, stands even with his 6’3″ father Donald Trump as they leave the White House bound for Florida on Nov. 26, 2019. Barron looked sharp in a blue bomber jacket and pompadour hairstyle.

Rarely seen First Son Barron Trump, 13, looks like a grown man as he accompanies his parents while leaving the White House for Florida’s Mar-a-Lago where they will spend the Thanksgiving holiday weekend. Barron showed off a new pompadour style hairdo.

Barron Trump looks bored to tears while walking with his mom and dad to Air Force One through the snow, in February 2019. At least his puffer coat looks great.

Barron Trump leaves Marine One with his parents on a chilly night in November 2018, after spending the Thanksgiving holiday weekend in Mar-A-Lago. He wore a navy blue puffer jacket.

Barron Trump Walks With His Mom

Barron Trump takes a stroll with his mom, Melania Trump, as they leave their Florida vacation in November 2018. Melania looked super stylish in a mod coat.

Barron Trump & His Parents Arrive At the White House

Barron Trump walks across the South Lawn of the White House grounds with his parents in August 2017. He was dressed in a navy blue long-sleeved polo-style shirt and white shorts.

Barron Trump is allowed to dress casually for a trip with his parents in August 2017 in a T-shirt, shorts, and boat shoes. Here he can be seen walking beside his parents.

Barron Trump Is ‘The Expert’

Barron Trump shows his parents he’s ‘The Expert’ while dressing down in a tee, jeans, and New Balance sneakers while returning from a New Jersey vacation in June 2017. He walked near his parents at this point.

Barron and his parents depart Air Force One after arriving home in Washington, DC, in June 2017. He looked down while stepping out of the aircraft.

Barron Trump Claps For His Dad

Barron and Donald Trump are all smiles with Vice President Mike Pence during the president’s 2017 inauguration. They were all dressed in suits for the gathering.

Barron, Melania and Ivanka Trump look on as Donald Trump signs his Cabinet nominations in the White House in January 2017. Barron wore a suit and tie like his dad.

Melania Trump fixes her son Barron’s tie during the Presidential Inauguration in January 2017. He looked great in a blue tie.

Barron and Donald Trump hug at the Republican National Convention in July 2016. They wore matching suits with different colored ties.

Barron Trump Poses With His Dad

Melania and Barron Trump appear onstage at the Republican National Convention in July 2016.