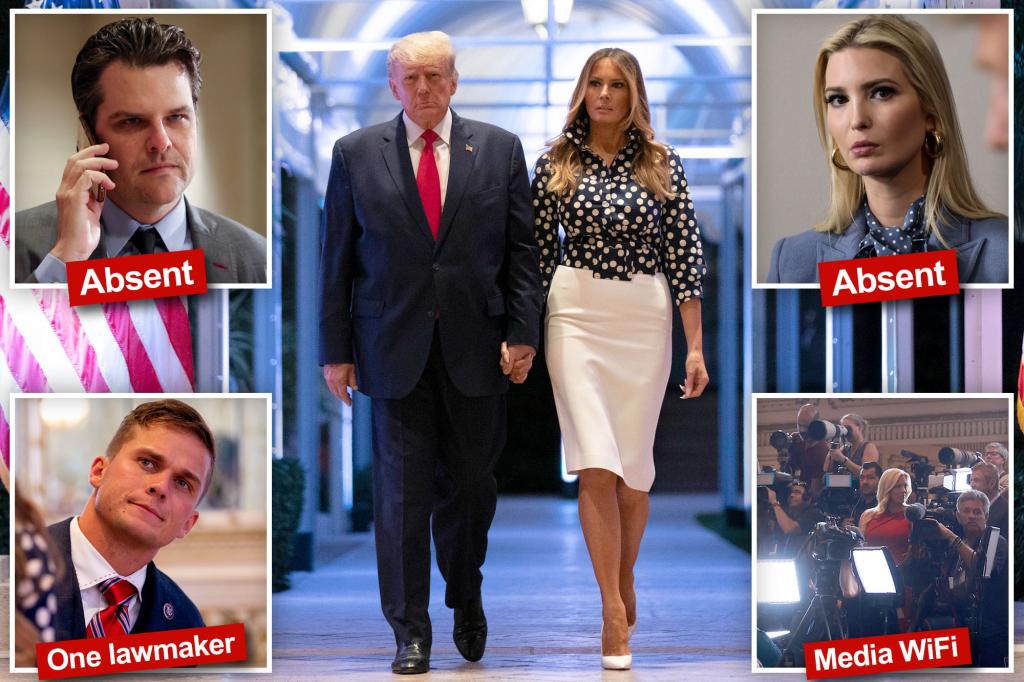 Former President Donald Trump’s announcement of his 2024 White House bid was undercut Tuesday night by the absence of his two eldest children, while only one sitting member of Congress — outgoing Rep. Madison Cawthorn — showed up to lend their support.

Former first daughter Ivanka Trump announced after her 76-year-old father’s campaign launch that she no longer plans to be involved in politics after working in the Trump administration as an unpaid adviser.

The 41-year-old rejected her father’s pleas to join him on stage to form a united Trump family front by skipping the announcement — though her husband, Jared Kushner, was spotted in the audience of around 1,000 Trump supporters in the resort’s lavish ballroom.

An insider told The Post on Wednesday that Ivanka’s conspicuous absence was a sign of increased dysfunction in the Trump dynasty. 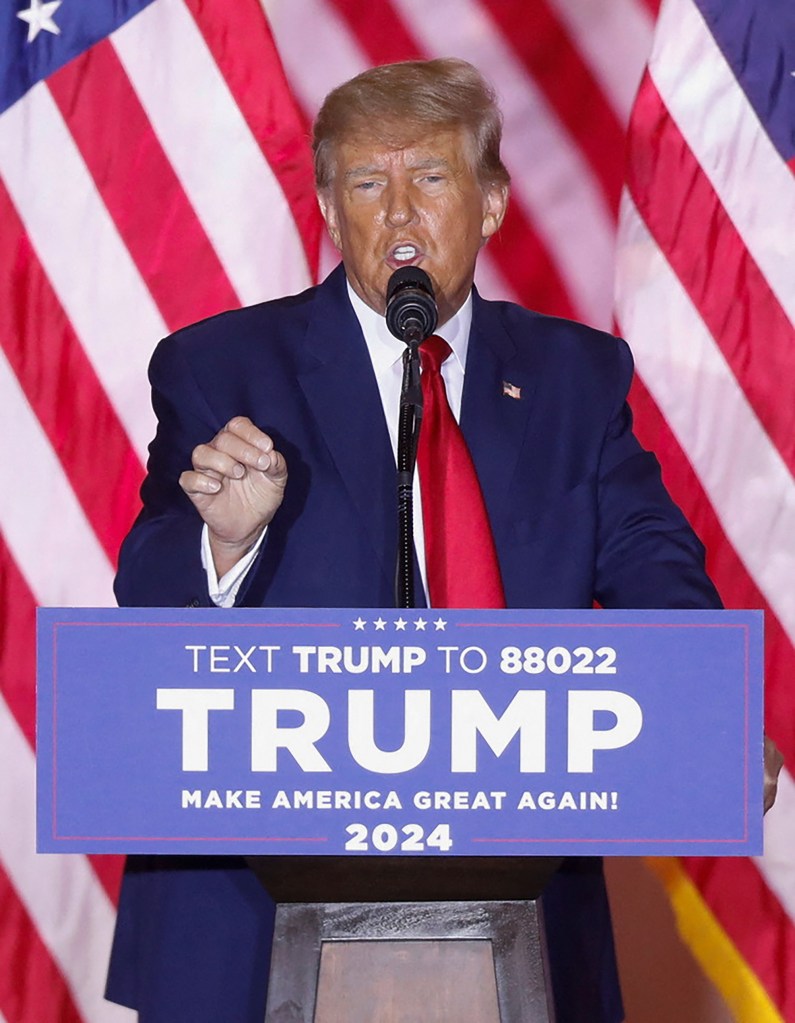 Former President Donald Trump’s announcement of his 2024 White House bid on Tuesday night was undercut by the absence of his two eldest children, while only one sitting member of Congress was in attendance.REUTERS 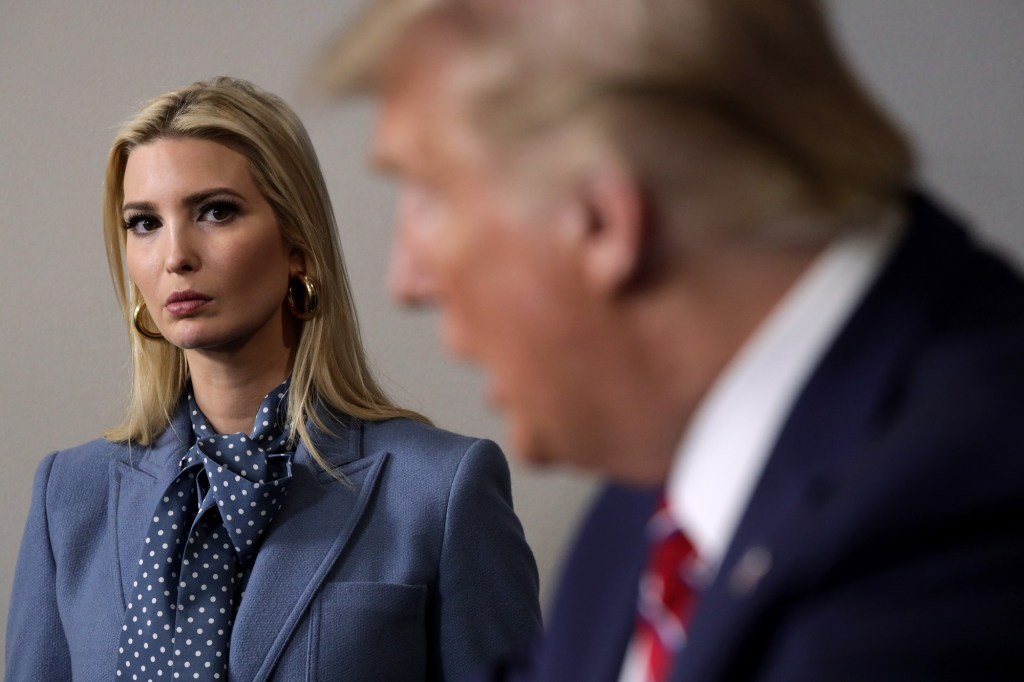 Former first daughter Ivanka Trump was a no-show at her father’s announcement.Getty Images

“He’s losing his tight grip on his family,” the source said of the elder Trump, “and he’s unhappy about losing Ivanka and Jared for the campaign.”

Another source close to the former president denied his team begged Ivanka to attend, though they did not deny Trump wanted her by his side.

Meanwhile, Donald Trump Jr. was a no-show after aides said bad weather prevented him from returning on time from a hunting trip in the Mountain West.

Don Jr., 44, is a fanatical hunter — notoriously traveling to Mongolia with a Secret Service detail in the summer of 2019, during his father’s administration — and a source familiar with his plans said he intended the trip to be a short diversion between his half-sister Tiffany’s weekend wedding at Mar-a-Lago and his father’s campaign launch.

The source added that Trump Jr. did not intend to miss the kickoff and will play “a similar role as he had in the 2016 and 2020 [campaigns].”

“He’ll be one of the key people out there campaigning for him,” the person insisted.

“The disgraced Madison Cawthorn slithered in from oblivion to attend Trump’s announcement. If elected president, Trump will surround himself with only the best people, like him,” snarked social media influencer Mike Sington. 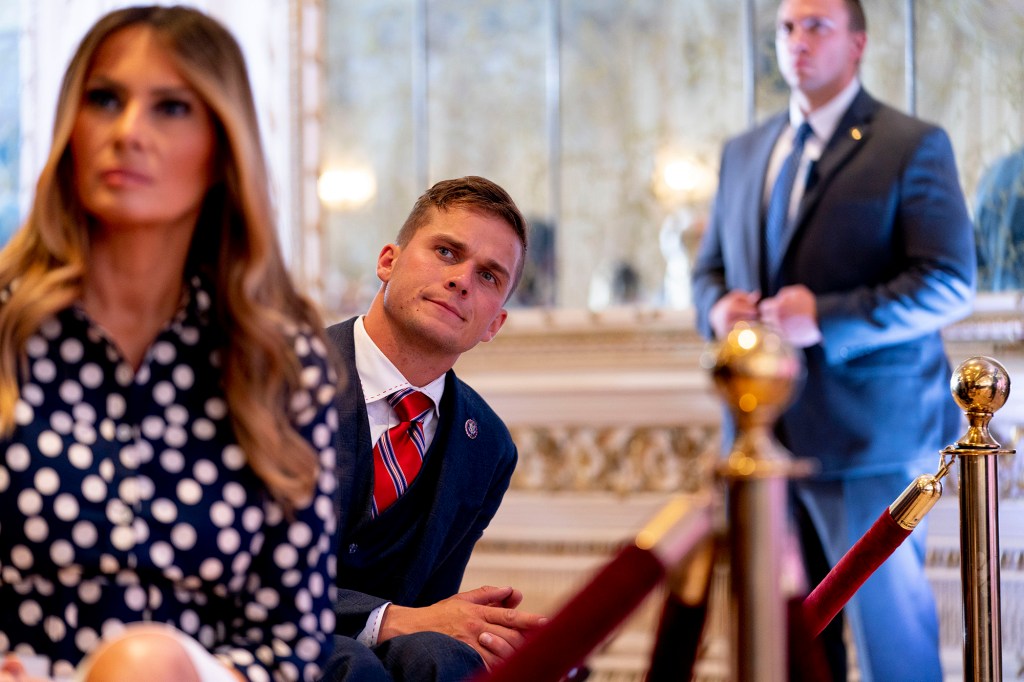 Disgraced outgoing member of Congress Madison Cawthorn of North Carolina “slithered in from oblivion to attend.”AP

Another lawmaker who was expected to make an appearance, Rep. Matt Gaetz (R-Fla.), first cited bad weather in DC to explain his absence, then a schedule clash with House leadership votes — to the incredulity of journalists who pointed out that Cawthorn had also worked on Capitol Hill Tuesday before traveling to South Florida. 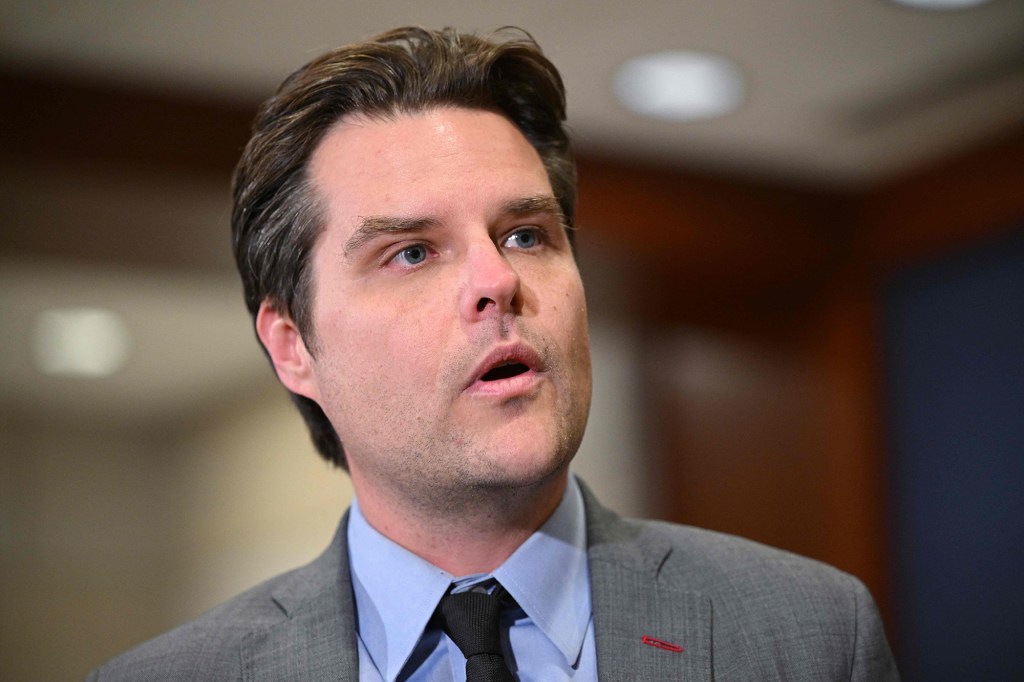 Rep. Matt Gaetz blamed bad weather and a schedule clash for his absence.AFP via Getty Images

The event was also hamstrung by technical troubles, as reporters fumed that Mar-a-Lago’s Wi-Fi was virtually unusable. A staffer told journalists that the issue required an urgent talk with IT and pleaded that the facility hadn’t hosted an event so large before, despite regularly being used for sizable gatherings.

The former president also raised eyebrows by walking out after the sound system boomed the anthem “Do You Hear the People Sing?” from the musical “Les Miserables” — leading outraged musical theater fans to note that the song glorifies lower-class French revolutionaries and was played inside a gilded room fit for the palace of Versailles.

Trump also had trouble keeping his audience’s attention, with some members of the crowd speaking among themselves and ignoring his words toward the end of his 69-minute speech.

As he droned on, video shared by ABC News reporter and producer Olivia Rubin showed members of the crowd making their way toward the room’s exits, only to be prevented from leaving by security personnel.

Despite the setbacks, Trump allies insist the 2024 campaign will be a repeat of his insurgent candidacy in 2016, when he also ran with virtually no support from elected Republicans and ultimately captured the nomination.

“I think it’s going to be a scrappy campaign that has a lot of the feel of the 2016 campaign — he has got fire in the belly. He’s got unfinished business,” former White House budget director Russ Vought told The Post prior to the announcement.