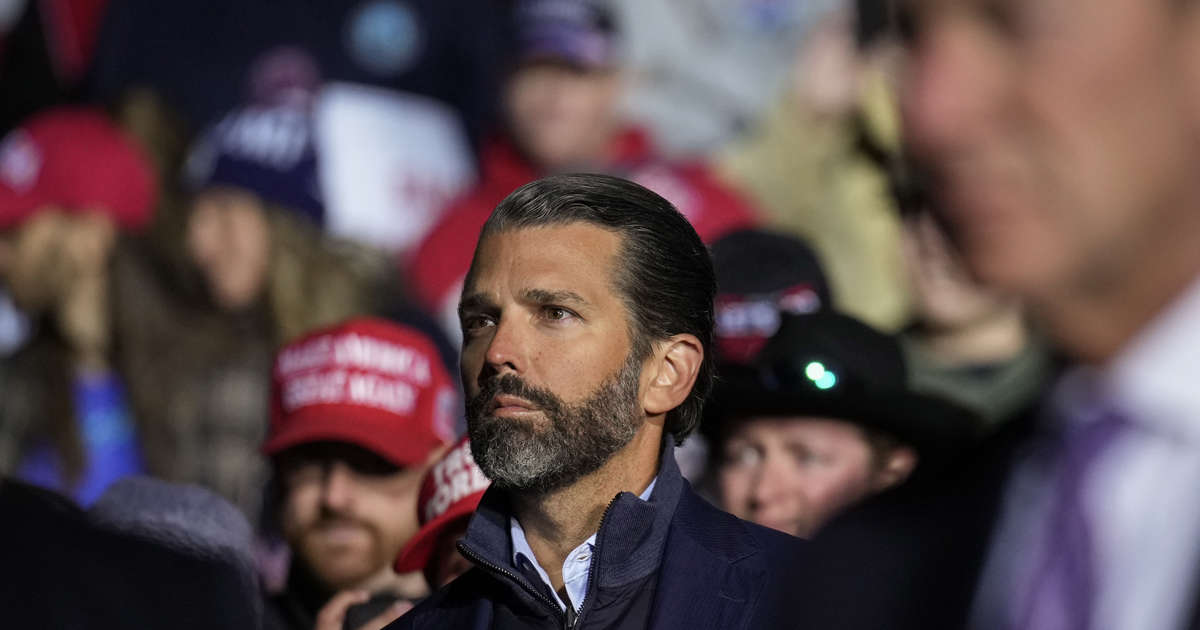 Donald Trump Jr., the former president’s eldest son, has been criticized as “an awful person” and “despicably cruel” after sharing a meme on Instagram mocking Pennsylvania Senator-elect John Fetterman for having suffered a stroke.

© Drew Angerer/Getty Images In this photo, Donald Trump Jr. listens as former President Donald Trump speaks at a rally at the Dayton International Airport on November 7, 2022 in Vandalia, Ohio. The former president’s eldest son was criticized for sharing a crude meme mocking John Fetterman for his health.

Trump Jr., who is known to share GOP memes on his Instagram account and calls himself “Meme Wars General,” posted a photo from 1985 movie The Goonies, showing the characters Chunk (Jeff Cohen) and Sloth (John Matuszak) hugging, with a text reading, “Congratulations Pennsylvania!”

To accompany the meme, Trump Jr. wrote: “Basically!!! Dear fact checkers it’s a parody and the guy from Goonies is not actually a candidate in PA even if the likeness is uncanny.”

The post was liked by more than 230,000 people, but once it was shared outside Trump Jr.’s social-media bubble, the reactions were far from enthusiastic, or amused.

Patriot Takes, an account researching and monitoring right-wing extremism on social media, shared the post on Twitter with the words: “Don Jr is an awful person.”

Users replying to the post agreed. “Republicans are just so mean,” one wrote. “Mean? I think you meant to say despicably cruel,” another replied.

“The whole family is awful,” and “The apple doesn’t fall far from the tree,” others wrote.

“This is what people are sick of,” another replied.

Twitter users also argued that the meme, though they described it as “offensive” and “disgusting,” wasn’t “as much of an insult as he [Trump Jr.] thinks,” considering Trump-endorsed candidate Mehmet Oz lost the midterms.

“This isn’t the burn he thinks it is. The good guys won, we will again!!” another wrote, as some users made the point that Sloth was “kind, loyal and generous” and ended up saving all the Goonies in the film.

The mockery of Fetterman’s health, and his difficult recovery from a stroke that left him some lingering speech and hearing issues, by Republicans and from Oz’s campaign is part of what made the Pennsylvania race so ugly.

In the lead-up to the vote, Oz repeatedly cast doubt over Fetterman’s fitness to serve, demanding the Democratic candidate share his full medical records with the public. A few weeks before the vote, Fetterman released a letter from his doctor saying he was fit to serve in office.

John Fetterman Revels In Beating Oz In Victory Speech: ‘We Jammed Them Up’

That didn’t stop the memes and mockery of the Lieutenant Governor. Only a few hours before sharing the Goonies’ meme, Trump Jr. shared another one making fun of Fetterman on his Instagram profile, showing the senator elect and President Joe Biden talking gibberish to each other.

The Lieutenant Governor has experienced some lingering speech issues that are very common for patients recovering from a stroke.

Trump Jr.’s Instagram posts about Fetterman marked his return to sharing memes on the platform after a few days of scaling down for the 44-year-old former president’s son.

After sharing a post saying “Happy Red Wave Day” on the day of the midterms—a red wave that never fully materialized—Trump Jr. had been unusually silent on social media.