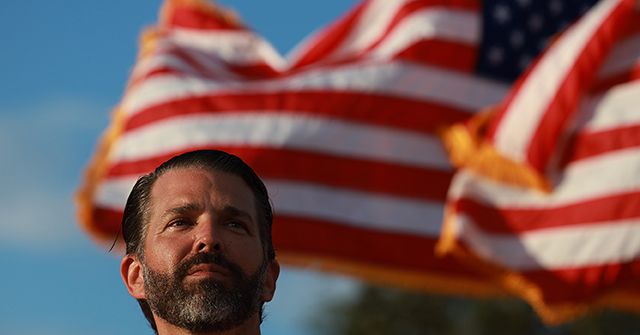 Former President Donald Trump’s eldest son, Donald Trump Jr., told Breitbart News exclusively that a podcast venture he is launching later this month with Rumble is part of a broader initiative he is undertaking to try to build up what he calls a “parallel economy” of companies and platforms that do not silence conservatives.

“I’ve been a big believer in that. I’ve been a big proponent of that. I’m probably the second real big verified user on Rumble for over two years. We’re just taking that to the next level, because I believe in these companies,” Trump Jr. said. “A big focus of what I’ve been doing sort of outside of my daily duties is finding those same companies who are starting in front of the parallel economy where conservatives are saying, ‘well, you’re there, you’re canceling my insurance, or you’re canceling my banking or you’re canceling my phones, or whatever it may be, because I’m a conservative. And just because I’m a concerned parent doesn’t make me a domestic terrorist, despite what the FBI has been saying.’ So there’s an entire emerging economy that’s developing around conservatives being set up around the left taking things too far around, woke corporate pushing crap that has nothing to do with the business, with what we’re consuming. People have had enough.”

Trump Jr. is launching a podcast called “Triggered with Don Jr.,” named after his bestselling book, next week on Rumble. The multi-year, multimillion-dollar deal with Rumble will start as a twice-weekly show with the potential to expand, and will be exclusively hosted on Rumble. Trump Jr. had been, per sources familiar with the matter, talking to other more legacy platforms about deals with them, but decided on Rumble because he wants to build up alternative platforms to the Big Tech giants such as YouTube or Facebook. Trump Jr. was one of the first major verified users on Rumble when it launched, too, and has over a million subscribers on the platform so far. His show, which will mostly air live, will feature long-form commentary from him and in-depth interviews with key newsmakers. 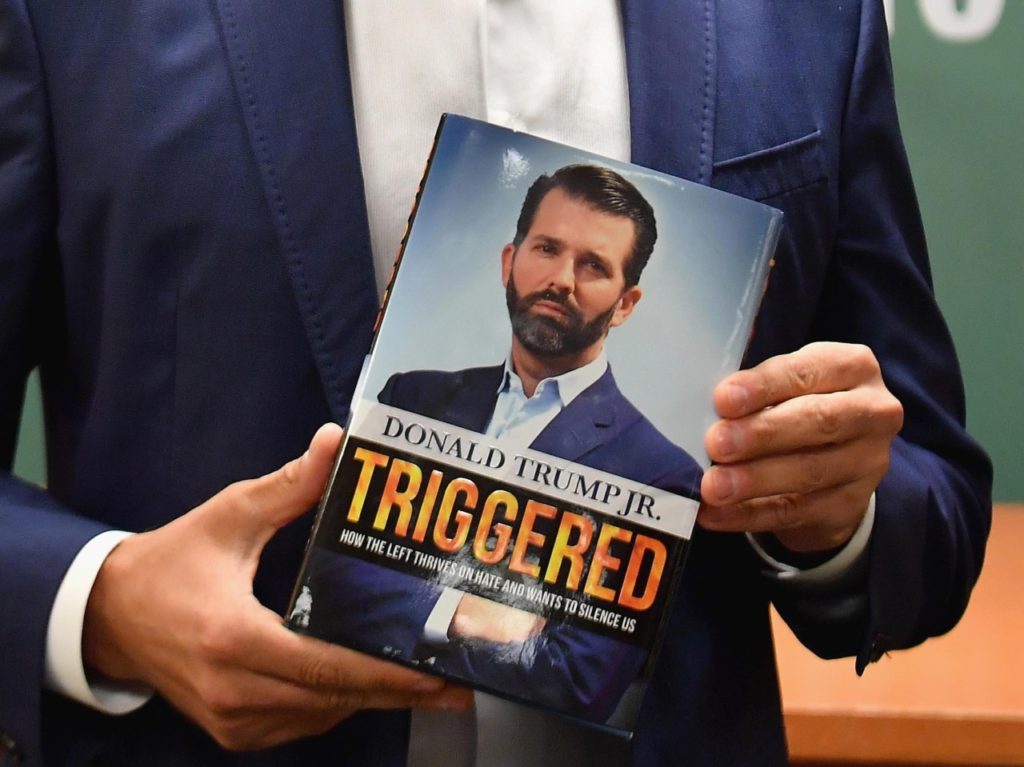 Donald Trump Jr., holds his new Book “Triggered: How the Left Thrives on Hate and Wants to Silence Us” at Barnes & Noble on 5th Avenue on November 5, 2019 in New York. (ANGELA WEISS/AFP via Getty Images)

“I think I’ve been sort of being a spokesperson for not just the red state economy, but for platforms who are willing to fight for free speech,” Trump Jr. said. “I think that’s an emerging market as evidenced by the tanking in the share price of Disney and Netflix where Americans and conservatives in particular are finally saying ‘you know what? They’re not cheap anymore, we’re not gonna let them jam their crap down our throats, ad nauseam, and pretend that we’re supposed to be fine with that. We’re not going to be belittled and called racist because we don’t want that.’” 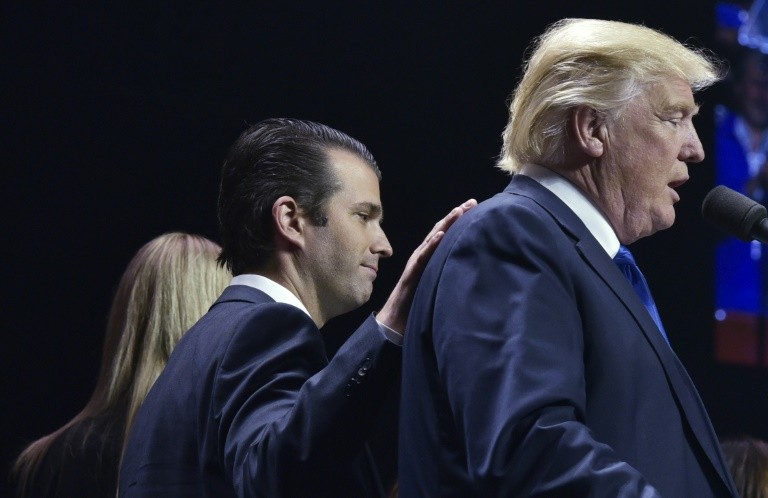 Asked if viewers can expect to see his father and people such as newly-elected House Speaker Kevin McCarthy on the show, Trump Jr. said that they can — but that also he will aim to bring more cultural and non-political voices to the forefront to tell interesting stories. 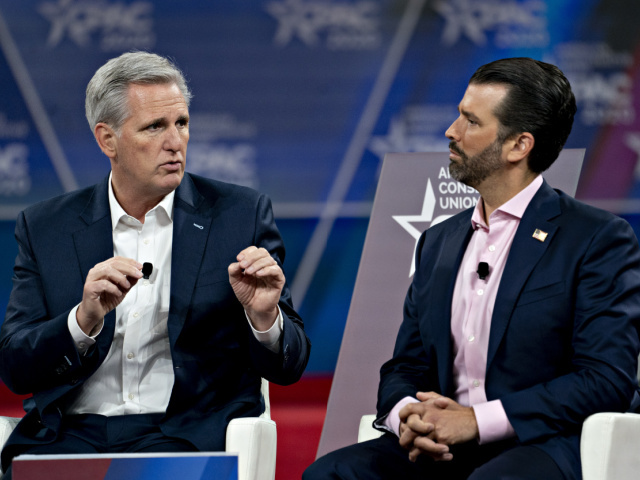 “I think you can see all of that,” Trump Jr. said. “But I also have led a pretty unique life, I’ve met a lot of really cool people over the years. There’s the opportunity to take it beyond just politics, also into culture and how that stuff gets impacted whether that’s business, entertainment, sports, or whatever else. Then obviously, being me and sort of the position I’ve taken for the last few years, I think everything’s probably a little politicized for me somehow. But that doesn’t mean it’s exclusive to that. I think we can have some really sort of interesting conversations with other people outside of that space that, again, I probably have access to a lot of folks who are very cool.”

He said he thinks long-form conversations, and getting away from the quick soundbites of cable news shows such as those hosted by the Fox News Channel’s Sean Hannity and Tucker Carlson, is going to be healthy for the movement.

“I think the importance of sort of long-form conversations like this can’t be understated,” Trump Jr. said. “I know I’m guilty of this myself. You get on Hannity or Tucker and you got four minutes to make 12 points and you’re just sort of running through the talking points. I think it sort of turns everyone into a robot and sort of dehumanizes everyone. I think the ability to draw some of these conversations out for people to understand the subtleties and the nuances — and perhaps even a little bit about the individual for themselves — I think that can actually change the dynamic of the conversation and the way people are even thought of. I’m going to have some fun with the long form side of things. It’s going to actually take some getting used to because I’m so used to being that fast talker — I have X number of seconds to make 30 points about the insanity of what’s going on. So to be able to do that really brings a new perspective, especially on the political side where it’s not really happening.”

The name of the show, “Triggered,” is something Trump Jr. said “came from obviously my highly-acclaimed New York Times number-one best-selling book of the same name.”

“So it just became something sort of associated with my brand and my political commentary which certainly does seem to trigger the left,” Trump Jr. said. “Now, I think it’s very similar to what I’ve been out there pushing for so long. The opportunity to preserve and protect free speech is so paramount to everything that our democracy and our republic stands for. Yet that’s been under constant barrage and constant threat. The guys at Rumble and Chris Pavlovski and his team over there have done an amazing job creating a platform for both sides. It’s not an echo chamber.”

Trump Jr. said too that his experiences and perspectives in the political arena — from backing McCarthy in the Speaker race to having endured major investigations during his father’s term in the White House — prepare him to bring a different perspective to the platform.

“I’ve made myself pretty involved in a lot of this stuff,” Trump Jr. said. “I think I have a probably a keen insight — a lot of inside baseball that, frankly, a lot of journalists wouldn’t be welcomed into because there’s one side of narrative that people want. I know people that are inside these rooms. I probably took a stance that was more pro-McCarthy than a lot of people would have taken or even wanted me to take because I knew people that were involved in the room and they’re telling me what’s legitimately going on. These are people I know and trust. I understood what was going on, so what I will do is I think laying out some of that to the people. When you understand, when you’ve been a fly on the wall, when you’ve been subjected to the nonsense, you really understand that what I’ve learned over the last few years is frankly the America we grew up sort of believing in, that doesn’t necessarily exist — the way we’d love it to exist or the way we’re supposed to exist is not real. So, exposing some of that, whether it’s me in free form or me actually sitting down with some of these big players who are in the rooms doing these things on a daily basis and bringing them into the public eye I think we’ll have a lot of fun with that. I think people will learn a lot about our system that will help them be able to effectuate real change and have the conversations that we need to be having.”

Regarding the investigations battles, he said fighting back during those years helped burnish his credentials with conservatives who like fighters.

“We all know I wouldn’t get the Hunter Biden treatment,” Trump Jr. said. “But I was doing that even at the time to my attorney, who said ‘hey, you can’t say anything like that.’ I’m like, ‘wait, I’m supposed to just roll over and die and let them lie about me and not fight back?’ Because me telling the truth will somehow be used against me in a court of law. That doesn’t work, it’s not my style. I guess I got to compensate for that one. But in doing that, and in fighting those fights and not giving up, I think I not only vindicated myself but I think I gave myself quite a bit of street cred with our base.”

So far, Trump Jr. is pleased with the work of McCarthy as Speaker and the new GOP majority in the House — something he intends to explore on his show.

“If you look at the first couple of days, it sounds pretty good to me so far,” Trump Jr. said. “They’ve gone after the 87,000 IRS agents, they threw Eric Swalwell and even Adam Schiff off of committees, because they recognize that having someone that’s been sleeping with a Chinese spy is not the greatest person to have on an intelligence committee. They’re doing those things. But those are things you would have said that may have never happened before. Now, that doesn’t mean I disliked the debate happening on the floor. Because I think people do want to see those things happen. They do not want to see people just rubber-stamping things under the cloak of darkness. I think I have a unique perspective that most journalists wouldn’t even have. I can have those conversations with those people, for the people.”