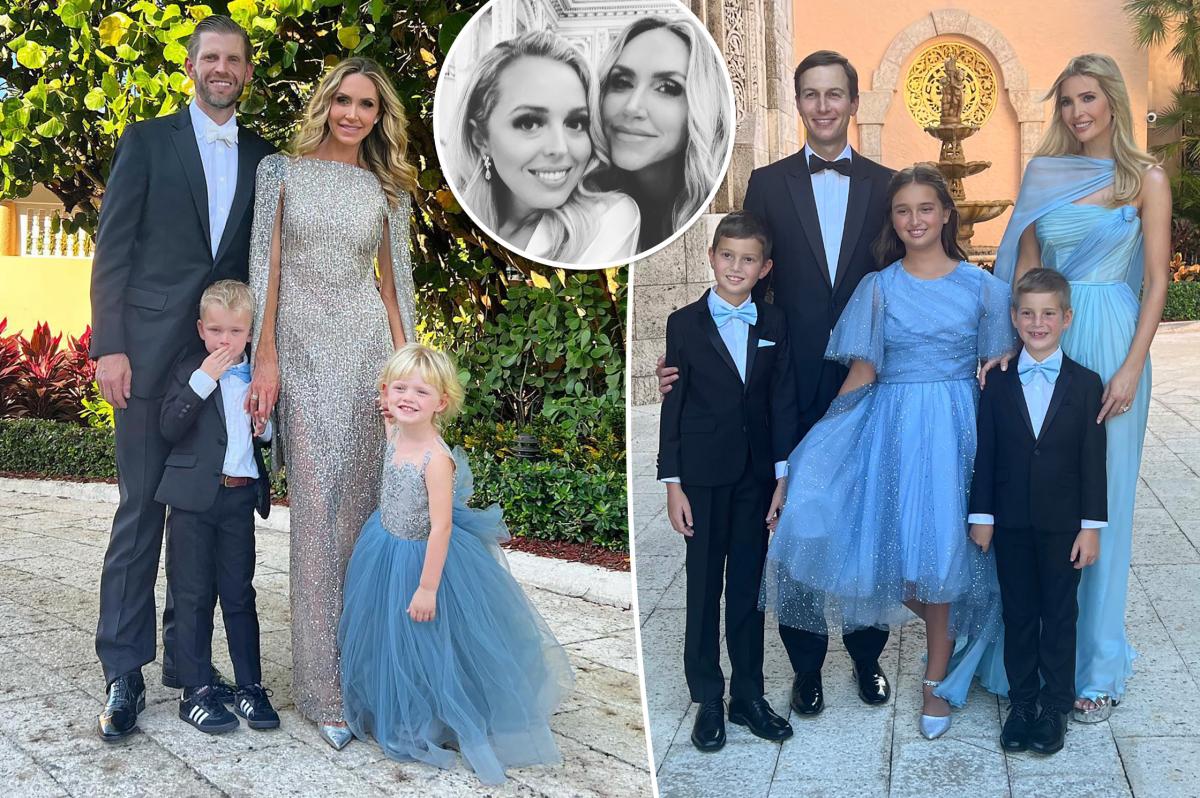 The eldest children of 45th US President Donald Trump posted pics to social media over the weekend after witnessing Tiffany say “I do” to Michael Boulos in Florida Saturday night.

Maid of Honor Ivanka, 41, stunned in a baby blue dress, with her children – Arabella, 11, Joseph, 9, and Theodore, 6 – all sporting matching ensembles.

Her mini-me daughter looked adorable in a blue dress while her sons matched their dad, Jared Kushner, in smart black tuxes paired with blue bow ties.

The eldest son of the former Republican Party leader joked that his kids looked like Smurfs in their blue attire.

“Great time with the Smurfs at Tiffany’s wedding yesterday,” he wrote. “The little one[s] were all in it and were perfect … not that there was ever any doubt.”

The post also included a photo of Donald Jr. with longtime girlfriend Kimberly Guilfoyle, who stunned in a black cocktail dress.

Eric, 38, also posed for a series of pics with his children, Eric L. Trump, 5, and Carolina, 3, along with their mom, Lara Trump.

The father of two planted a kiss on his young son’s cheek in one photo, before standing beside his daughter in another pic, who was on theme in a blue tulle dress.

Her gown featured a gold bodice, which matched her mother’s glittering gown designed by Oscar Lopez.

As for Tiffany, the blushing bride wore a glittering Elie Saab wedding gown while saying “I do,” before changing into an off-the-shoulder dress with a thigh-high split for the reception.

Other guests included Donald’s wife Melania Trump, along with Tiffany’s mother, Marla Maples, who split from her ex in 1999.

The nuptials came a few days after Page Six reported that the bride-to-be was “flipping out” after her “welcome dinner” was jeopardized due to Hurricane Nicole.

“They’ve sent staff home. Tiffany is still there,” a source told us Thursday, amid concern the inclement weather could jeopardize the whole wedding weekend.

Tiffany snapped a few selfies with wedding guests, including Lara.Instagram/laraleatrump

Tiffany and Boulos met in 2018 while she was on vacation in Europe and he was studying at City University of London.

He eventually got down on one knee with a $1.2 million diamond in the White House Rose Garden in January 2021.