Ivanka Trump grew ‘visibly upset’ as she failed to get her father to rein in his supporters on Jan. 6, before retreating to an office 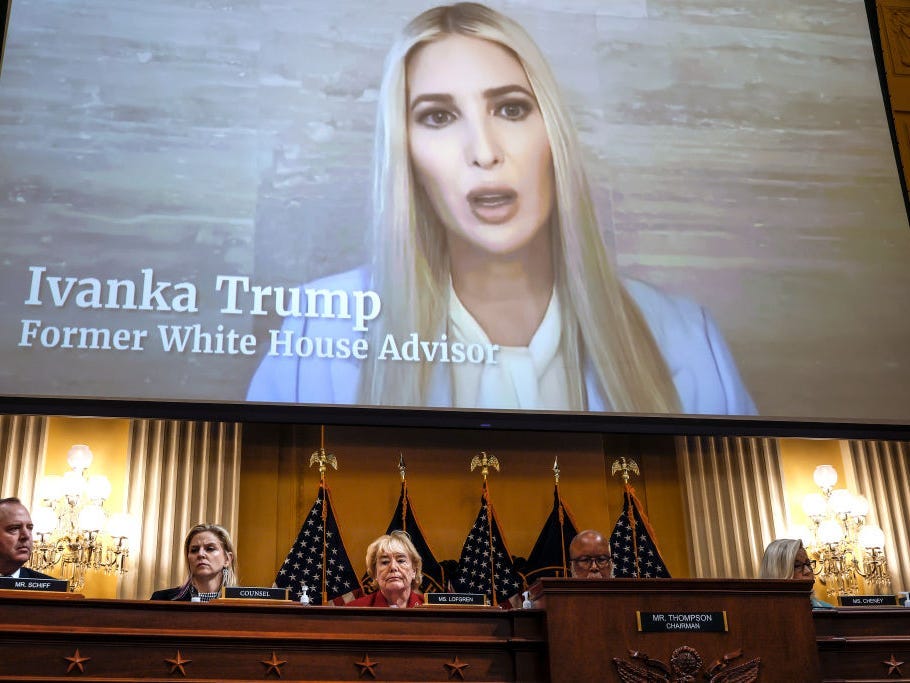 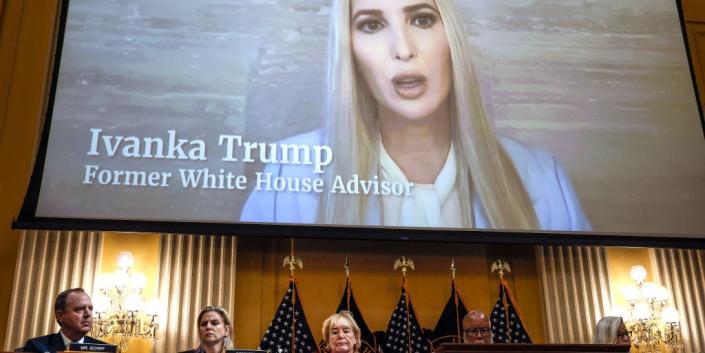 Video from an interview with Ivanka Trump played during a hearing by the Select Committee to Investigate the January 6th attack on the US Capitol, June 13, 2022 in Washington, DC.Chip Somodevilla/Getty Images

Ivanka Trump appeared “visibly upset” after she attempted to persuade her father, then-President Donald Trump, to call off his supporters as they attacked the Capitol on January 6, 2021, a report by the House committee investigating the riot found.

According to the report, released Thursday, Ivanka Trump, who served as a White House advisor during her father’s presidency, told the committee that she had unsuccessfully tried to reason with her father as his supporters ransacked the Capitol, and at one point retreated to the office of her husband, Jared Kushner, “because she needed to ‘regroup’ and collect herself.”

Witnesses backed up her account, saying she had appeared upset, and as though she had just had a “tough conversation.”

Multiple witnesses told the committee of attempts to persuade Trump to intervene and try to stop the violence, which he refused to do, instead watching the attack as it unfolded on television.

Ivanka Trump was enlisted by aides to try to reason with her father, and persuaded him to issue a message urging protesters to “stay peaceful” as the violence escalated. According to the report, she made several attempts throughout the day to get her father to more forcefully condemn the riot.

It was 3 hours after the attack on the Capitol began that Trump finally issued a message telling his supporters to go home.

Ahead of the riot, Trump had delivered an incendiary speech to supporters, who subsequently marched on the Capitol and attacked it in a bid to halt Joe Biden’s certification as president.

The report argued that Trump was responsible for the attack, recommending that he be barred from office. The January 6 committee has referred Trump to the Justice Department on charges including insurrection.

Trump has denied responsibility, and claims the committee is politically motivated.

Ivanka Trump served as an advisor during Trump’s term in office, but has since distanced herself from her father’s political career, announcing that she will not be taking part in his campaign for the presidency in 2024.