Trump begged Jared and Ivanka to join him for his campaign launch — but both refused, New York Post reports 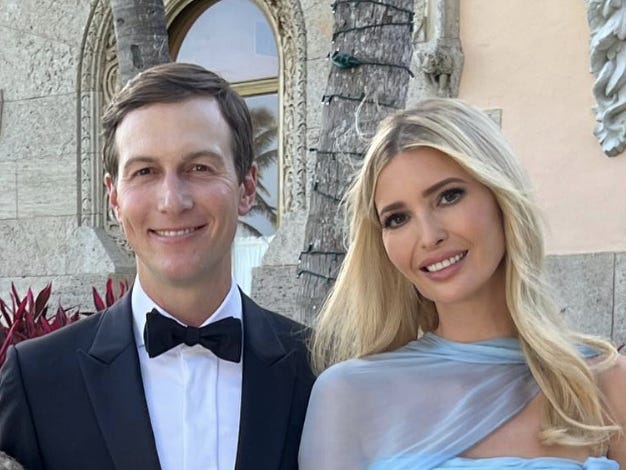 Jared Kushner and Ivanka Trump at Mar-a-Lago for the wedding of Tiffany Trump in November 2022.Ivanka Trump/Instagram

Former President Donald Trump tried and failed to persuade Ivanka Trump and Jared Kushner to join him for his campaign announcement, according to The New York Post.

An unnamed source told the paper that the couple was “holding firm” after Trump spent much of the weekend coaxing them at Mar-a-Lago, as the family gathered for Tiffany Trump’s lavish wedding.

Trump is expected to announce his third presidential run on at Mar-a-Lago on Tuesday evening.

He teased the announcement on Truth Social with a post Tuesday morning saying: “Hopefully TODAY will turn out to be one of the most important days in the history of our Country!”

The Post’s source told the paper: “Trump thought he could convince Ivanka this weekend to come back and campaign for him as she was the most requested speaker after the president himself last time around.”

“But so far she’s resisting his entreaties and holding firm, as is Jared,” they continued. “They both feel they got burned in Washington and don’t want to go back and expose themselves and their children to another bitter campaign.”

Ahead of the wedding, CNN reported — citing a source familiar with the family discussions — that it was already understood between Ivanka Trump and her father that she would not be helping him campaign.

A Trump spokesperson did not immediately respond to Insider’s request for comment, which was sent outside of working hours.

But Kushner and Ivanka Trump have long signaled they are not keen to rejoin the fray of politics. Ivanka Trump is “done” with Washington, DC, another source told CNN. Both were notably absent while Trump hit the campaign trail and handed out GOP endorsements for the midterm elections.

In early September, Kushner told Sky News that he’s “enjoying the private sector” too much to jump back in. As of July, the couple had stopped working on Trump’s political operation, Axios reported at the time.

The final line-up of which family members would join him on Tuesday night was still up in the air, the source told The Post, adding that the discussions caused “extra behind-the-scenes tension” at the wedding.

The source suggested that Trump might take the stage alone to avoid the image of being supported by only some of his family. Tiffany Trump wouldn’t be there because of her honeymoon, the paper reported.